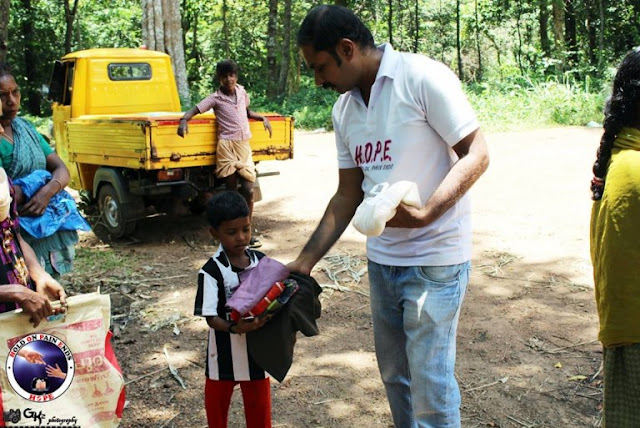 TechnoparkToday.com(July, 2014): What started as an idea on Facebook has become a commendable endeavour to help the needy and society at large. H.O.P.E (Hold On, Pain Ends) was launched on New Year’s Day and in six months, initiated action on every problem they encountered. Starting from blood donations at RCC, Medical College and General Hospital for patients during emergencies or May it be a hungry old man abandoned on the streets or a talented handicapped rejected by fate, H.O.P.E always extended their helping hands.

On the Facebook page, are all the stories, says Mahesh Parameswaran Nair, IT professional from TECHNOPARK, Thiruvananthapuram and also the Founder Chairman of the Registered NGO, H.O.P.E (Hold On, Pain Ends).

Mani Swami was an old man left on the streets by his children. That day a TEAM from H.O.P.E was delivering food packets to the poor. They gave him food; they bathed him and dressed him in new clothes. His family would not take him, so they took him to the hospital and made him agree to be taken to an old age home.

When the same Team heard about another man who bled to death at the Thampanoor railway station, they took out a candle-light vigil to pass a message on saving one another and took a pledge. “Inspired our members have saved dying people from the streets on a couple of occasions “ Mahesh says.

Their biggest achievement so far was the marriage of two orphan girls from the Sri Chitra Home and now building homes for three families in Attinkkara Colony.  They had also been able to help Dhanya Ravi, a talented girl from Amrithavarshini Trust who was suffering with Osteogenesis Imperfecta (OI), bone brittleness disease, with an automatic powered wheel chair. They also sell handicrafts and paintings of these children from Amrithavarshini and the sold amount was handed over to them as a source of income.

H.O.P.E conducted few medical camps and makes frequent visits to Old Age Homes, Mental Homes, and Orphanages etc to extend their helping hands in the form of food, clothes, medicines or various  entertainments , games and fun activities. They also donated books, Uniforms, Bags and various other study materials for children from poor families and also take free academic or career oriented or personality development classes for such students during weekends.

H.O.P.E members also encourage Organ Donation and all their members are registered Organ donors. They also provide various assistances for CANCER patients in RCC. The team even cleaned the streets of WEST FORT and were able to remove wastes with the assistance of Trivandrum Corporation Authorities and is continuing their services as and when possible.

H.O.P.E now has grown to a family of IT professionals, Doctors, Police men, Architects, MBA students, and various other college students. Mahesh hopes more people join his team to do what they can for the world around them. All their funds come from volunteers in the team, from the near and dear ones of the members, by selling old newspapers and by farming. What started as a charity group has now grown to a family of kind people who wish to return something back to the society and at the same time raise voice against injustice.

Share
Previous Some football thoughts…
Next A Positive Budget, says Kerala IT Industry