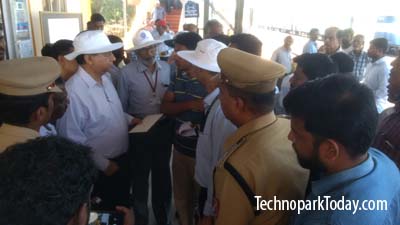 TechnoparkToday.com>> Southern Railway’s General Manager R K Kulshrestha visited Kazhakkoottam Railway station today morning at 10:30am as part of inspection.  Prathidhwani team had a short discussion with him and handed over our representation for more stops at Kazhakkoottam railway station. The team informed him about the necessity of stops and our previous representations, huge rally to Railway Station, Short film making, Selfie campaign etc.

Even the assured stops for Intercity Express and Mumbai-Kanyakumari express after the protest rally has not been implemented yet. Welfare Organisation of IT Employees, Prathidhwani decided to resume the protest for more stops.

The team requests all employees to lend continued support in the demand for new stops.