An innovation enabling the wheelchair-bound to drive using only hands

TechnoparkToday.com>> Wheelchair-bound Biju Varghese, an award winning entrepreneur is showcasing his car engineering system that enables people in wheelchairs to drive using a hand-operated brake, clutch and accelerator lever, which is fitted on to the gear of any car.

His engineering stall at Vyapar 2017 tells the story of a man’s grit and his resolve to face life’s challenges head on.

The Automotive Research Association of India (ARAI)-approved system, which Biju developed in 2003, can be fitted in 15 minutes with no alterations to the car and can be removed just as easily. While the unit can cost between Rs 15,000 and Rs 30,000, depending on a person’s disability, Biju fits it free of cost to customers who genuinely cannot afford it. He works out of a workshop, where he employs two workers, close to his house in Mukkoottuthara in Kottayam district.

“I feel proud that I have given a new lease of life to over 2,000 disabled people and, in turn, to their families,” says Biju, who suffered a spinal injury in a road accident when he was 25.

The gritty innovator decided then that he was not going to let the injury leave him bedridden, and through a trial and error method, the self-taught mechanic developed the unit. “My car does 170 km per hour when I drive on the highway to Pune,” he points out, proudly.

Tragedy struck Biju’s life when his wife of nine years developed a brain tumour and underwent surgery last year. But the couple, who have a son, are determined not to be cowed down. “I drive to Vellore Christian Medical Centre every Thursday for my wife’s treatment,” he says.

The entrepreneur’s big dream is for his innovation to be picked up by an automotive engineering company, so that it can be widely recognised and distributed. “I have done so much almost single-handedly,” he says. “Now, I want many more disabled people, all over the world, to benefit from this.” 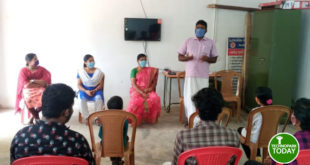 TechnoparkToday.com>> As part of CSR activities, QuEST Global provided an LCD TV to students in …