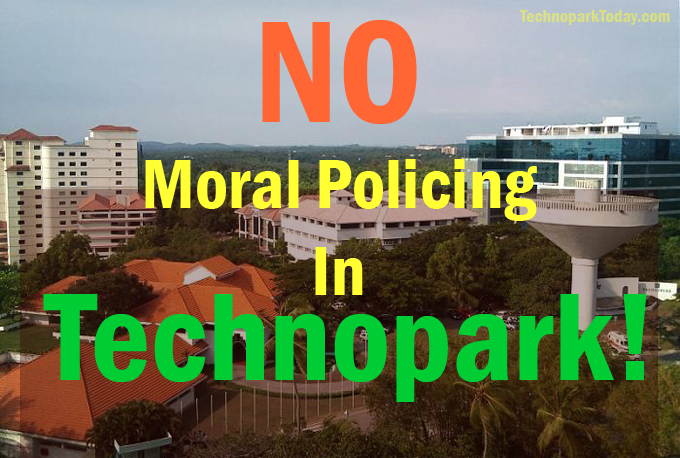 TechnoparkToday.com(Feb, 2018): In light of recent moral policing & harassing incident in Technopark, Prathidwani – The socio cultural organisation of technopark raised a complaint to the authorities.

It says, The move to deploy the SISF force at the gates of Technopark undoubtedly instils sense of safety and security for the employees. But a series of unfortunate incidents have tarnished that image.The recent incident where a couple had to face moral policing which even lead to registering of false case against couple is unfortunate.

The couple along with their three colleagues were coming to office for some official work after having dinner from Kazhakuttam. Stopping the car for security check and raising issue as lady didn’t have id card is understandable. But what followed was clear case of moral policing wherein the Security employee was not ready to give pass to lady and started raising questions asking if the lady was indeed his wife. Even this incident was resolved after the company security called to the gate for issuing entry pass. After this too they had to face harassment from SISF personnel and the security, further threatening to register false case against them.

We have several thousands of employees going to and forth inside technopark . So a serious security procedure is a must but care must be taken to see that the security personnel are dealing with such incidents as security issues and not as law and order issues. In the above incident the case to prove the lady is his wife was itself unnecessary.

There has been multiple cases where people had to wait for a long time to clear the security checks incase of forgetting to bring the id card. The indecent behaviour of some of the security officers at the gate create a negative image for anyone who are coming for the first time. Their indecent behaviour not only eats into our precious time but causes mental distress.

Further the threaten of registering false cases must be dealt seriously as we IT employees normally have to travel onsite and such police case against them will seriously affect their travel and career.

Techies  request for the following actions

1.Provide a proper training for the security personnels on the code of conduct that is to be followed

2.Have a proper guideline on how to obtain the gate pass to enter Technopark campus without company ID card

3.Moral policing on any grounds must be stopped

4.All security lapses must be dealt only as security issues and not as police cases or law and order problems

6.Immediately remove the SISF employee and security involved in this case from the security duty.

As we know, Technopark is a place where thousands of educated youngsters are working and spending majority of their lives here. it’s a gender neutral workplace where people are working in harmony based on their technical and managerial skills. and more than 50% of workforce is women. such moral policing and other harassing incidents from the police will only tarnish the reputation and dignity of techies. so we request the authorities to consider this complaint as serious and take necessary measures to not repeating such incidents.